Literacy Milestone: Reading in Bed (on her own) 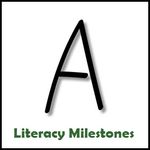 Last night I was busy tidying up, and I asked my daughter to go get into her pajamas, and said that I'd be in shortly to read with her. Things took me a bit more time than I expected. When I arrived in my daughter's room I found her propped up in her bed, reading All-Time Favorite Classics, a thick collection of stories based on Disney animated movies. She was quietly reading 101 Dalmatians, and told me that she wanted to finish reading that herself, and then have me come and read Peter Pan to her. I, of course, backed slowly away, and left her to her reading. When I did return I took my own book with me, and climbed in next to her, so that I would be there when she was ready.

While I am more than happy to continue reading aloud to my daughter before bed for as long as she will let me, I also celebrate this milestone of her being able to read on her own in bed. Reading in bed is one of my favorite activities. It's how I relax and prepare for sleep. Many days, it is the only time I am able to spend reading for pleasure. I want this respite for my daughter, too. It warmed my heart to walk into her room and see her reading away.

A note on her book choice may also be in order. I have literally dozens, perhaps hundreds (if we push the reading level a bit), of other chapter books that she could be reading. Most, one could argue, of higher literary quality than these movie-recap versions of classic stories. But she was interested enough in this book to dig it out from the bottom of a stack of other books. 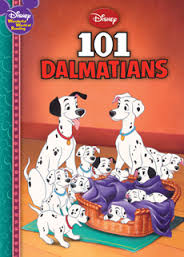 She was specifically interested in 101 Dalmatians because this was the school play at her school last semester, and her friend played Cruella. This version of the story is text-dense, featuring words like "suspicious", and I doubt she could read every word. But there are large color illustrations on every page, and the story is familiar and safe. Most importantly, she was had a personal interest, and had chosen the book to read on her own.

That's what it comes down to, for me. Choice. If you give kids choice in what they want to read, and you keep a variety of books strategically located in your home, you will sometimes be rewarded by walking in on your child, lost to the world, reading in bed.

Posted at 07:50 AM in Literacy Milestones, Newsletter | Permalink | Comments (2) 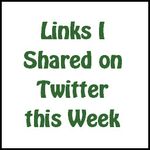 Here are highlights from the links that I shared on Twitter this week @JensBookPage. It's been a bit of a light week for links, as people ease their way back in after the Thanksgiving holiday. But I do have some links for you about #BookLists, #PictureBooks, book awards, book drive, diversity, e-books, gift guides, gifted-and-talented programs, growing bookworms, homework, Native American Heritage Month, reading aloud, and reading levels. Happy reading!

The very first Undies: Case Cover Awards have been selected | @100scopenoteshas the scoop  http://ow.ly/1HOy306Gglj  #PictureBooks #YA 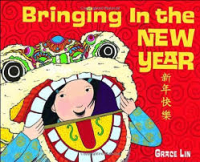 Some great, kid-tested stuff on the "I Would Buy That Again" Gift Guide from @sunlitpages  http://ow.ly/4fTv306GlhM

Tips on Selecting Special Gift Books for Kids Who Already Have a Lot of Books from @mrskatiefitz  http://ow.ly/3n9z306Gh0W  #RaisingReaders 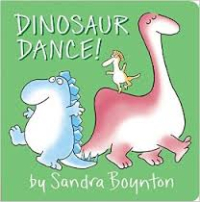 Nice! Tips from a distant aunt for #reading together w/ kids across the miles | Cynthia K. Ritter @HornBook  http://ow.ly/Ya2W306GohW

Tips for Navigating the Challenging World of #ReadingLevels from librarian @DanielleBookery at Guessing Geisel http://ow.ly/XWoU306GoDB

On Reading, Writing, Blogging, and Publishing

Liberate the Turkey and #Homework on Holiday Weekends - some ideas for what to suggest instead from @mssackstein  http://ow.ly/y3Pg306yVUf 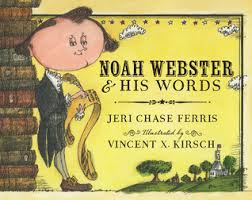 Noah Webster & His Words, written by Jeri Chase Ferris and illustrated by Vincent X. Kirsch, is a picture book biography of the man who compiled the first American dictionary. We learn that Noah was born in 1758, expected to be the next in a long line of Webster farmers. But Noah wanted to be a scholar, and the world is more literate today thanks to his efforts.

The book follows Noah through the major events in his life, as he goes to college, becomes a schoolteacher, starts working on his first speller, marries, and so on. I hadn't realized the patriotic underpinnings of Webster's work prior to reading this book, and found reading about Noah's motivations quite uplifting. Here's the first hint:

"In October 1781, King George's soldiers SURRENDERED [verb: gave up] at Yorktown. The war was over at last! America was free and IN-DE-PEN-DENT [adj.: not controlled by others]. THat gave Noah an idea. He would write the schoolbooks for America, beginning with spelling. "I will write the second Declaration of Independence," Noah wrote to a friend. "An American spelling book!"

I quite like the way Jeri Chase Ferris incorporates dictionary-like definitions right into the text. This both reinforces the subject of the book and makes a fairly text-dense book more accessible to new readers. I also like the way she uses a slightly old-fashioned tone to her writing, to suit the time period. Not so much as to make the book inaccessible to modern kids, but just enough to give a flavor, though the use of words like "Alas". The text is rendered in an old-fashioned-looking font, also, furthering this impression. Even the author and illustrator bios at the end of the book follow these conventions, complete with definitions. This made me smile.

Vincent X. Kirsch's illustrations show somewhat oddly proportioned people (see cover image above), but I think he does capture Noah's scholarly, well-intentioned character. I think that kids will appreciate seeing how Noah ages over time as the book progresses. The muted color scheme also support the historical, bookish feel of the book. The brightest thing on many pages is Noah's blue-backed speller".

I only had one nit about the text. There's a sentence: "Over the next ten years Noah wrote six more schoolbooks for children and had several children of his own." The "several" seemed imprecise in a biography. I had to consult the end matter to see how many children Noah and his wife did have, to satisfy my own curiosity [8]. I'm guessing that the children arrived over more than those ten years, and this was too complex to explain, but it took me out of the story. This is, however, my only complaint about a solid, interesting, well-written book.

A handy, illustrated timeline at the end of the book fills in details for those who are interested in extra facts, and should make Noah Webster & His Words a useful reference title for elementary school kids. A bibliography includes both primary and secondary sources [providing a good opportunity to introduce this concept to kids.]

Noah Webster & His Words is a picture book biography done right, from the choice of an important historical figure to the selection of anecdotes and facts to the choice of fonts. It belongs in primary school libraries and classrooms everywhere. As for me, I gained a new appreciation for Noah Webster, and for the importance of dictionaries in making America the distinct country it is today. Highly recommended!

© 2016 by Jennifer Robinson of Jen Robinson's Book Page. All rights reserved. You can also follow me @JensBookPage or at my Growing Bookworms page on Facebook. This site is an Amazon affiliate, and purchases made through affiliate links (including linked book covers) may result in my receiving a small commission (at no additional cost to you).