The Orchid and the Dandelion: W. Thomas Boyce, M.D.

Book: The Orchid and the Dandelion: Why Some Children Struggle and How All Can Thrive
Author: W. Thomas Boyce, M.D.
Pages: 304
Age Range: Adult nonfiction, especially relevant for parents and teachers 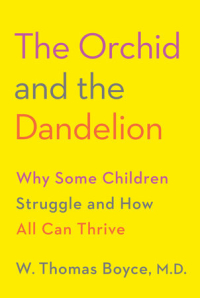 I found The Orchid and the Dandelion, by W. Thomas Boyce, to be an informative read. The premise of this adult nonfiction title is that there’s a normal distribution of kids in terms of sensitivity / reactivity to their environment. Boyce, a longtime researcher and professor of pediatrics and psychiatry, classifies the 20% who are most reactive as orchids and the rest as dandelions. His research, and that of others, suggests that the dandelions are relatively impervious to things that happen to them. They can thrive good or bad situations. They are resilient. They bounce back. The orchids on the other hand, can do extremely well when nurtured properly. They are “unusually vital, creative, and successful within supportive, nurturing environments.” But in the presence of adversity, they tend to do poorly. They get sick more often (especially respiratory illnesses) and can veer towards mental illness, anxiety, addiction, and other negative behaviors.

It’s not completely clear what causes orchids, but Boyce thinks there’s a strong genetic component and that it was selected for in evolution. The orchids were early warning systems when things were bad, and then high-achievers when things were stable, and both aspects were thus beneficial. He also thinks that there’s a strong epigenetic component – that how people genes end up expressing as orchids is affected by their environments, from natal to childhood. Boyce identifies the orchids primarily by testing kids’ stress responses (fight-or-flight and cortisol responses to challenges).

I found this book fascinating. It’s a challenging read, covering a lot of science, and definitely requires a high level of concentration from the reader. Boyce helps make it more accessible, however, by sharing his personal story of his orchid sister who failed to thrive and eventually committed suicide. He also shares lots of examples of actual (names changed) kids who he has treated, studied, or known over the years. Finally, he includes incisive little biographies of the people he works with over the years that humanize what could have been a dry recounting of research. Here's one example: “Growing up, he had been a rebellious, recalcitrant, and generally annoying adolescent, forever in trouble by virtue of his impulsivity and an intellect that well outstripped his school’s and family’s capacities for containing and challenging it.” (Page 108 of the ARC)

I did have a couple of issues with the book:

Those issues aside, I did find the book engaging thought-provoking. It made me think about my own development and my daughter’s, and about things that might help some of the people around me. I highlighted many passages and learned a variety of things. Here are a few of my (many) notes:

If any of these tidbits catch your eye, then you should give The Orchid and the Dandelion, released last week, a look. It does take some time and mental focus to read it all the way through, but I think you'll find this investment worthwhile. I know I did. I learned a lot. Recommended!

Publisher:  Knopf
Publication Date: January 29, 2019
Source of Book: Advance review copy from the publisher. Please note that quotes are from the ARC, and may differ from the final printed book, particularly in regards to page numbers.

© 2019 by Jennifer Robinson of Jen Robinson's Book Page. All rights reserved. You can also follow me @JensBookPage. This site is an Amazon affiliate, and purchases made through affiliate links (including linked book covers) may result in my receiving a small commission (at no additional cost to you).

Itch: The Explosive Adventures of an Element Hunter: Simon Mayo

Itch is a young adult thriller featuring an unusual hero. Itchingham Lofte (aka Itch) is a total science geek. His passion is collecting elements from the periodic table. When a fellow collector shares a very unusual rock with Itch, Itch soon finds himself, and his family, in grave danger.

Itch is in many ways a classic YA thriller. There are chases. There are over-the-top bad guys. There is a need for the hero to be brave. But there is also science. Instead of using conventional weapons, Itch turns to the elements when he's in a tight corner. He gets excited about watching a sample analyzed in a lab. He burns off his eyebrows in the first chapter, in a mishap with phosphorus. His sister Chloe and best friend/cousin Jack (short for Jacqueline) are more regular (and more mainstream popular) than Itch, but the hero's journey here belongs to the science geek.

Itch, written by an English radio presenter, is set mostly in Cornwall. There's definitely a British feel to the book. Take this little exchange, from Chapter 1:

""Hello, Itchingham," said his mother. "Still no eyebrows, then."

There should be a law against parents using sarcasm, thought Itch as he poured his cereal." (Page 13)

I don't know about you, but I hear Itch's Mom with an English accent there.

In addition to the details about the elements, there is quite a bit of information included in Itch about copper mining. And, just to keep things interesting, a bit about surfing. Who knew that surfing was a major pastime in Cornwall? Not me. But all of this is quite refreshing, together making Itch stand out from the pack.

I did find the start of the book a bit slow, but the action picks up after a bit, and the end of the book is both fast-paced and high-stakes. Not realistic, perhaps, but definitely high-stakes.

A sequel will be published in 2014. As Mayo left a couple of threads cunningly unresolved, I (and many others) will be waiting eagerly to find out what's next for Itch. With its green and black cover and blurb from Anthony Horowitz, Itch's target teen boy demographic is fairly clear. But I think that anyone who enjoys thrillers with teen protagonists could appreciate Itch. And I think that teachers and librarians will be happy to see a book that not only doesn't avoid but actually embraces science. Not science fiction, not high tech, but pure science. Rather refreshing that (despite the arsine gas accident and associated vomiting). Itch is well worth a look.

This site is an Amazon affiliate, and purchases made through Amazon links (including linked book covers) may result in my receiving a small commission (at no additional cost to you).

© 2013 by Jennifer Robinson of Jen Robinson's Book Page. All rights reserved. You can also follow me @JensBookPage or at my Growing Bookworms page on Facebook.